After hours and hours of searching, and hiking, and waiting, and driving...I went to Jasper Pulaski Fish and Wildlife Area in Indiana, which is about a 2 hour drive. I just found out about the place a few days ago, or I would have went alot sooner--ALOT sooner!

It was A>M>A>Z>I>N>G!!!!!! Anyone who is close enough, should really plan a visit. There were thousands of cranes, seriously! I had no idea what to expect, but it was so thrilling, it seemed like a vacation. You could see them for miles in any direction, flying in continuously...A photographers dream! 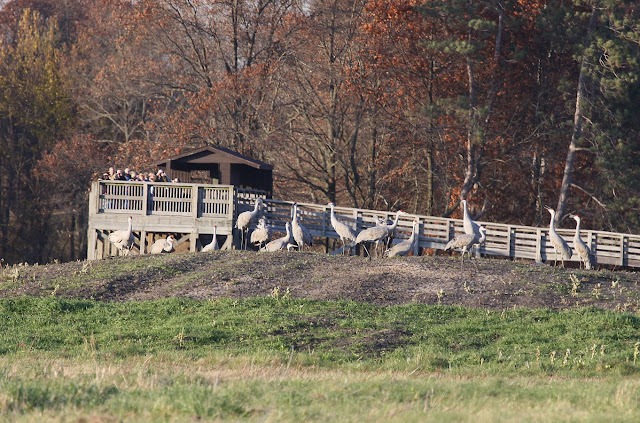 AFTER THE FIELDS HAVE YIELDED THEIR LAST HARVEST, chill north winds signal the time when greater sandhill cranes, Grus canadensis, head to warmer climes. From their nesting grounds in the northern Great Lakes states and provinces, the gray birds will set their internal compasses on a southeasterly course toward Florida and southern Georgia. Ten thousand, twenty thousand — and in peak years as many as thirty thousand birds — will stop to rest at Jasper-Pulaski Fish & Wildlife Area, 50 miles inland from Lake Michigan near Medaryville, Indiana. 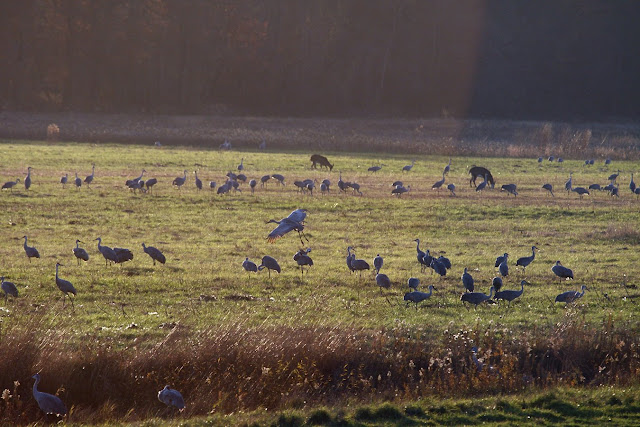 This seasonal mass-gathering of the sandhills is a marvel that attracts birders, nature lovers, and the just plain curious. The number of human spectators in past seasons has topped 30,000, with busy days drawing upwards of 200 visitors.

The long-legged, long-necked sandhill cranes depend on this wetland habitat for protection and rest, while the surrounding agricultural land in this still-rural region provides them with meals of waste grain, small rodents, and insects. Such large numbers of cranes may also choose Jasper-Pulaski for its convenient location along an almost direct line between their start and end destinations. They also seem to be funneled here along Lake Michigan, an obstacle they won’t fly over. 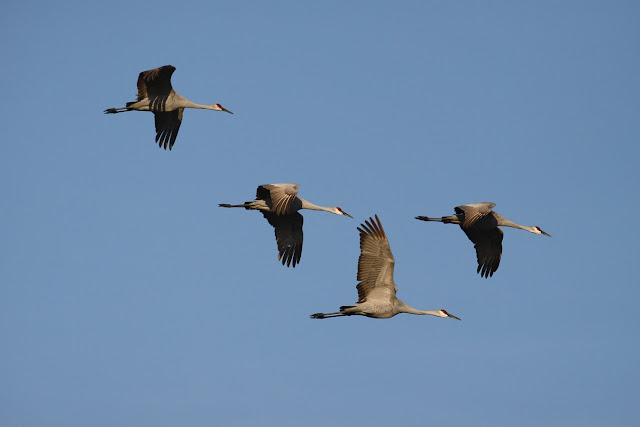 Beginning with their arrival as early as August, the cranes — which are joined by Canada geese, ducks, and occasionally even federally endangered whooping cranes — stake claim to Jasper-Pulaski’s 300-acre Goose Pasture, a field planted in winter wheat and surrounded by wetlands, where they’ll stay for three or four weeks. As early, smaller flocks continue south, massive new flocks flood in. By mid-November — peak fall viewing time — daily crane counts swell to 15,000, and sometimes 30,000 during warmer autumns. They congregate again February through March, though the autumn stopover yields the greatest numbers of cranes at one time. 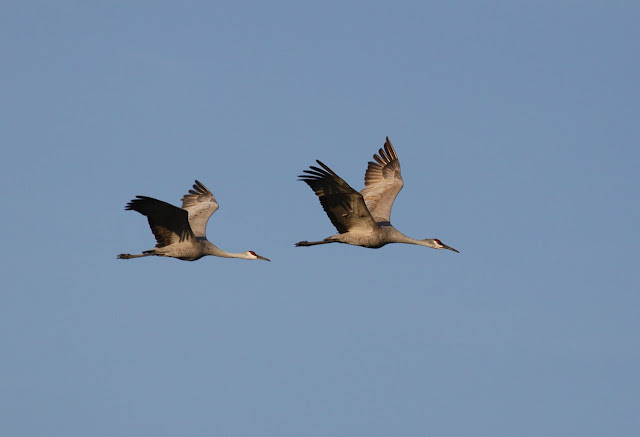 During the daytime, motorists can observe cranes on the wing or feeding along US 421 and along Highway 143 near the main entrance to Jasper-Pulaski. The cranes forage the open fields within a ten-mile radius of their main staging grounds. They return to Goose Pasture around sunset to loaf and socialize, before flying off to sleep in the safety of the open wetlands. The birds’ trilling calls — likened by some to a wobbly trumpet burst — rise to maximum volume just after sunrise and again near sunset, the best hours for viewing their peculiar dance. In this ritual, one crane bows low and then jumps straight into the air. The pair will call in unison, and often one will fling bits of grass while jumping. Considered a courtship ritual in February and March (when the cranes come through on the way to nest up north), the fall version of the dance is thought to be more of a bonding ceremony between lifelong mates. 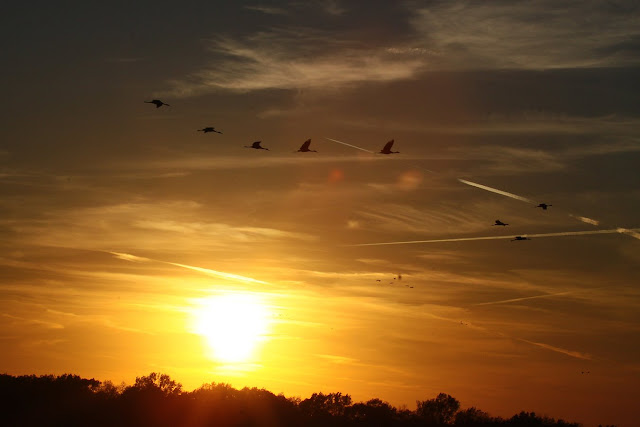 Visitors can watch from an elevated viewing platform equipped with three scopes. “It’s quite a spectacle,” said assistant property manager Jason Gilbert. “We have people who come all the way from overseas. Ninety percent of the total eastern crane population stops over here in the fall.” 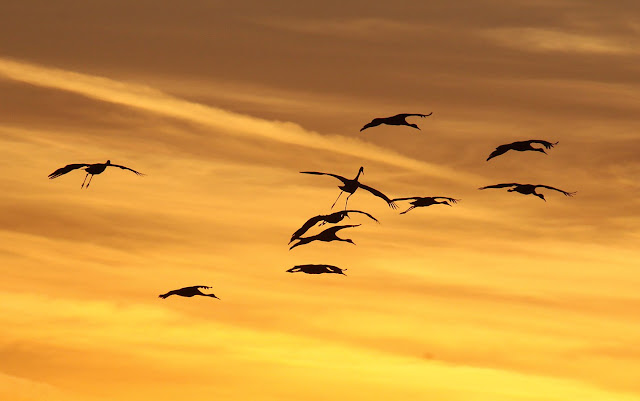 Commercial hunting and habitat loss early in the 20th century — here and elsewhere — had caused sandhill crane numbers to diminish. Nesting sandhills disappeared from Jasper County after 1929, the same year Jasper-Pulaski became a game farm and preserve. But populations began to rebound in the 1940s, and by fall of 1967, the count at Jasper-Pulaski was at 2,500. No cranes were nesting though. 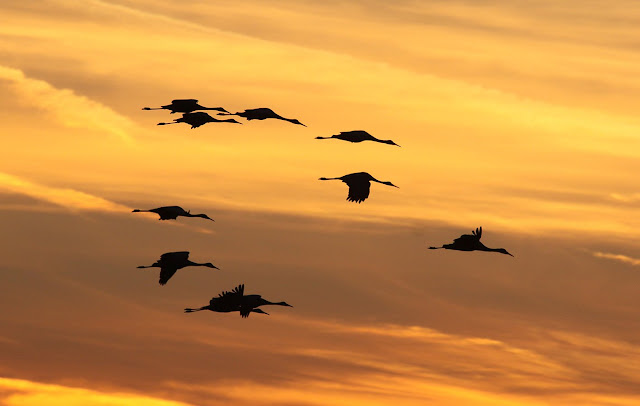 Beginning around 1982, thanks to enforcement of crane protections and efforts to save their habitat, birds began nesting once again in Indiana. 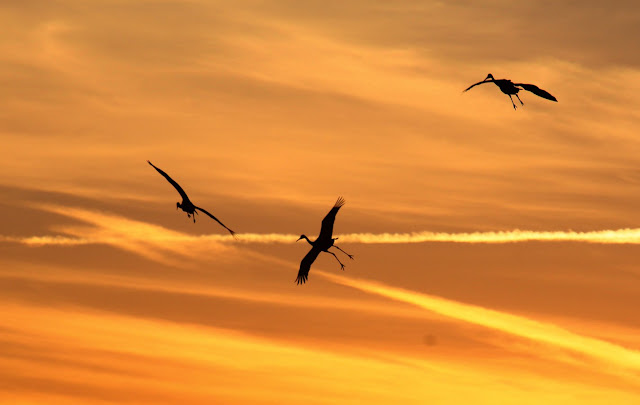 Today, an average of 2,000 sandhill cranes stay at Jasper-Pulaski through the winters and summers. And some that stay here are breeding. The nests are in remote areas of the 8,062-acre preserve. 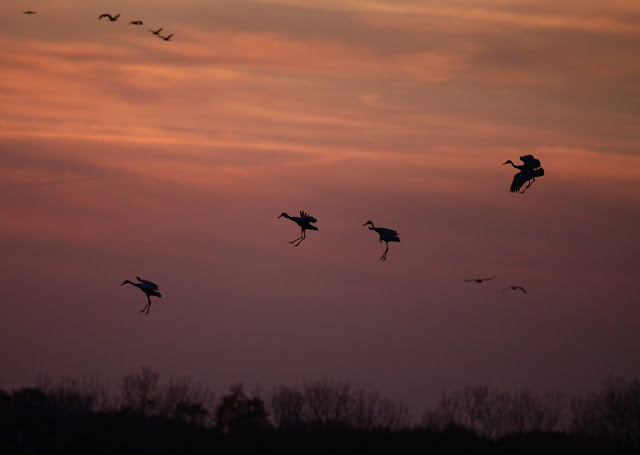 All visitors must register at the sign-in shelter near the headquarters, where they can also pick up maps and information. To the west is a shaded picnic area and restrooms. Visitors should dress for the weather and consider bringing binoculars. The preserve is on Eastern Time (one hour later than Chicago). For more information, call (219) 843-4841.
Posted by Peggy at 11/07/2008 10:47:00 AM

Hooray! What a thrill! And what photos! The ones against the sunset took my breath away!

Hannibal it looks like you have found the mother lode of the Sandhill Cranes and my hats off to you. Your photos are magnificent!

Please stop by my blog to pick up your award!

Hannibal - the sunset photos should be framed - outstanding!!

Good for you! What delightful pictures. Love the sunset ones the best!! worth the 2 hour trip I would say.

When you see the red on the head you know you are CLOSE! Wonderful flight shots, Hannibal - and the goofy mid-air positions the cranes get into make the pictures just glorious at sunset - WONDERFUL - I'm so happy for you!

Wow! That place sounds fantastic. And your photos are great. My favorite was the one with the setting sun.

Thanks for providing the fruits of your "photographic hunting." I like to photograph birds and have a few myself. Yours seem to be special and so well composed. Great Job.

Just watched hundreds forming groups over N.W. Indiana (Chesterton area)headed west. Not flying over the lake, as you said, they are probably by passing it, and headed for Wisconsin. How remarkable to be able to see them, as well as hear them, as they fly over. What a show!

Thanks for cruizin my site! I travel to many counties, (Grundy, Will, Livingston, Kankakee, LaSalle, Kane, Cook) so I hope my photos represent the north-central part of Illinois. My photography is about sharing a moment with nature, and capturing the natural behavior we don't usually see. I am most happy when I can walk away unnoticed, have the shot waiting to download, and know that I did not disturb natures natural order. I am a conservationist, and some might even say a tree hugger, but I would say I'm not too extreme (yet). I would hope that my agenda for creating this blog is to at least stir up a new appreciation for the environment that we live in.


I also love to recieve comments, so even though you probably don't know me personally, I gave something to you, can't you give something back? Tell me what you like, what you don't like, you know... critique, I'd love to hear it! Click on comments or envelope icon at bottom of each post to leave a lil part of you...for me!

All photos on this site are © 2011 Peggy Hanna. They may NOT be used without my written permission. All Rights Reserved.